Since the Middle Ages, thousands of pilgrims went on foot to the main places of worship to expiate for their sins.
The three main destinations were Rome, Santiago de Compostela and the Holy Land.
One of the roads leading to the capital was called Via Francigena, or Romea, because it was the one that connected Rome with France. 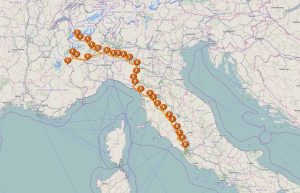 The oldest document that describes one of the tracks that you could follow, dates back to 994 and it was written by Sigerico, the Archbishop of Canterbury (GB), city from which he began his trip.
His journey consists of 79 stages where he stopped, from which you can determine the probable route taken. We talk about a total of approximately 1600 km, so an average of 20 kilometers a day on foot.
In modern times, it has begun to rediscover this route after the great success of the way to Santiago (or St. James).

The various local communities have placed more and more interest and investment in its promotion, arriving in 1994 to be recognized “Cultural Route of the Council of Europe.”
The Associazione Europea delle Vie Francigene (AEVF) (European Association of Via Francigena ways) is the official and promotional organization of the itinerary, its website is http://www.viefrancigene.org. 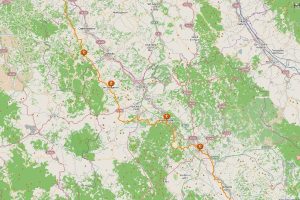 The Italian section is divided into 44 stages and starts from the Gran San Bernardo to finish obviously in Rome. Among the cities reached, there are also San Gimignano and Monteriggioni, arrival destinations respectively of the 30th and the 31st stage.
Now the Via Francigena is not only crossed by pilgrims but also by nature and walk lovers, and who believes in the slow tourism, enjoying and tasting the places visited, as opposed to the more practiced hit and run tourism.
Our shop, in San Gimignano downtown, is always open, to allow wayfarers of this track to stop and try one of the Tuscan typicality, the truffle.
We are waiting to give to you all the information that you need about this precious fruit of the earth.
If you want to learn even more, we can organize a truffle hunting, a fun experience that will enrich your journey.

This site uses Akismet to reduce spam. Learn how your comment data is processed.

Stai in sicurezza a casa, il tartufo te lo spediamo noi! Contattaci per info su limitazioni e tempi di consegna
Stay at home, get your truffle with home delivery! Contact us for more info and delivery timeSHOP
+
This site uses cookies only to collect information about how visitors use our site. By continuing to navigate this site, you accept our use of cookies.OkMore info